While picking up produce from the local farm stand for our regular Saturday night gathering I came across a bin of green tomatoes. I had been struggling to come up with another side and figured I could give fried green tomatoes a try.

These are unripe tomatoes, not some fancy heirloom such as Green Zebra tomatoes. These are very firm; not a rock but certainly not a fragile tomato that will be easily bruised.

Notes:
Tongs worked really well for me; far better than a spatula.

Next time I’ll try some buttermilk to coat the tomatoes instead of the egg. Egg worked OK however most of the recipes I looked at suggested buttermilk. Also I’d try this thing Ted does when he makes chicken fingers where he coats the chicken and then let’s it rest on a cooling rack for 10-15 minutes before frying. This helps the coating to bind to the chicken and seems to help it stay affixed after cooking.

These would have been good with a little spice mayo or remoulade sauce.

The warm weather has returned for a few days so I did most of the cooking on the grill this week. It took a bit of trial and error to use the grill as a cooktop however it can be done.

END_OF_DOCUMENT_TOKEN_TO_BE_REPLACED

We try to have at least one vegetarian meal each week and when I’m at a loss for what to make I turn to chickpeas. This dish is similar to the Chickpea side dish recipe I posted years back. The flavor profile is different and it makes a filling meal with some rice.

Notes:
I prefer to use Goya Reduced-Sodium Chickpeas for this dish.

A half tablespoon of acid, such as cider vinegar, stirred in to the chickpeas at the end of cooking will enhance the flavor of the dish.

This recipe was inspired by the brats we enjoyed as part of the Milk-Can Supper we enjoyed a few months back. I think the result was very tasty and I’ll certainly make brats this way again.

Notes:
I had lack of burners the night I made these so I cooked them to 155°F, dumped the brats and onions in a oven-safe dish, added a bit of the beer broth, covered it with foil and tossed it in the oven set to “keep warm (which is ~250°F for me). When dinner was ready 30 minutes later these were all set and ready to go.

The weather turned cool this past week which, while a pleasant relief from the prior weeks hot & steamy weather, was a bit of a surprise. I’m not ready to turn on the furnace though I didn’t mind pulling on my favorite flannel shirt. In any event the cool weather made me long for comfort food. A friend’s birthday, and favorite dishes, helped narrow down the menu.

END_OF_DOCUMENT_TOKEN_TO_BE_REPLACED

I have dinner with my mom at least every couple of weeks. She shared a zucchini brownie that a friend of hers passed along and it was pretty good. I had a zucchini and thought I’d see what I could come up with. The results were pretty good, though more a snack cake than a brownie.

It is amazing to me how well the zucchini is absorbed into the finished product. If I didn’t know it was there I don’t think I’d be any the wiser.

Notes:
I shredded the zucchini on the large holes of a box grater.

I stand by the lightly moistened sand analogy. Shocking how much liquid the zucchini provided and how it goes from nothing-like-brownie-batter to a geez-this-is-thick-brownie-batter in less than a minute.

Our friend Gary suggested we have pulled pork a couple of weeks ago. As these things happen he was unable to join us the week we got around to making it. {shrug} It was delicious.

END_OF_DOCUMENT_TOKEN_TO_BE_REPLACED

Summer is a season of abundant local produce. Not a week goes by without fresh tomatoes from the garden and gifts of cukes and summer squash from friends and co-workers. We do our best to use it all before it needs to be donated back to the compost pile. Salad is a fine way to consume fresh veggies as long as you, or your friends, will eat the salad. 🙂 This simple, lettuce free, salad comes together quickly and went well with grilled chicken. 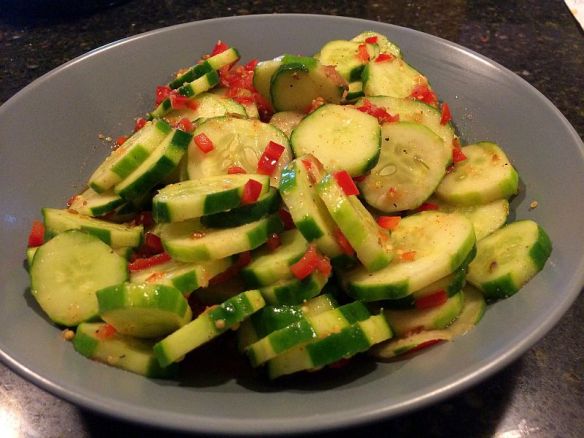 END_OF_DOCUMENT_TOKEN_TO_BE_REPLACED

One of my co-workers “donates” his excess produce to me. This week it was a couple of mid-size eggplants. My mind went to ratatouille. The farm next to the office yield everything else I needed.

Notes:
This came out pretty well if I do say so myself. The veggies stayed fairly cohesive while the onions and peppers basically melted into the background. That said there’s room for improvement. I think I would only roast the veggies for 20 minutes in the future to leave a bit more bite to the veggies.

This recipe is based on past experience with technique learned from Cook’s Illustrated. Additional inspiration was found in Alice Waters’ Ratatouille. 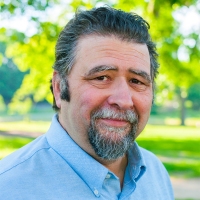